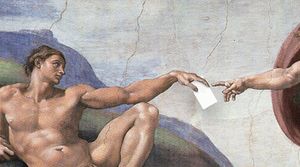 Are you a Quitter?
Why is it so easy to get distracted from doing good?
Have ever been inspired to truly step outside your comfort zone and do something great for God?
Have you ever noticed how quickly and easily it is to lose that inspiration and let that thing fall by the wayside?
It’s so common for us to start doing good and quickly fall off that even the Apostle Paul had to tell the Jewish church, in his letter to the Hebrews, to make a conscious effort to continue to gather together, to keep their fire and to keep moving forward.

Paul knew then, what many of us have discovered in our own lives: It’s human nature to grow lazy and stop doing better. Heck, it’s even nature’s nature to devolve over time. The second law of thermodynamics states that eventually any system will continue to slow, decay and decrease in function until it stops.

I look at periods of my own life when I would start a project and then stop before I finished it. I would commit and then quit. I dropped out of college for a semester (Thanks God, I went back). I quit grad school right before my thesis was due. I joined a church plant only to leave before they ever got off the ground. I fell in and out of love before the girl even knew what hit her. I was always committing to something, only to find myself quickly bored and quickly quitting.
Have you ever done that?

Why Didn’t Paul Quit?
That’s why I’ve always wondered how Paul could do what he did… how we could be so radically converted and then take such a powerful leadership role and keep moving forward through his entire life despite all he went through. Why did that guy never quit?

When Paul had his white-light, conversion experience on the road to Damascus, he was moved, change and commissioned all in one moment. It seems as though Paul never even had a period of grief over his past failings like so many of us Christians do when we get saved. In fact, Paul goes right to work after his life change and very quickly takes the lead in fulfilling the great commission even though he never even heard Jesus speak those words directly.

Paul’s conversion is interesting in so many ways but most applicable here is because he wasn’t given clear direction on what to do with his life (but Paul seemed to know). Jesus blinded Paul and then told him to stop his old way of living, go to a nearby city and await further instruction. When Paul came to the city the instruction came from Ananias who told him he was to help him see again and be filled with the Holy Spirit.

Paul went to work preaching immediately and he moved as though he already had authority regardless of the distrust of his peers or their plots to kill him. Paul wasn’t really even accepted in his new life-mission until he was vouched for by Barnabus, and even then he was not officially commissioned until almost two years later at the church in Antioch. Two years of work, with no formal commission, no clear direction just a simple conviction. And Paul NEVER quit or even indicated he was disenchanted with his new found calling.

Then, for the rest of Paul’s career, there is sheer mayhem. In 2 Corinthians 11:23-27 he describes his trials as such: “I have worked harder, been put in prison more often, been whipped times without number, and faced death again and again. Five different times the Jewish leaders gave me thirty-nine lashes. Three times I was beaten with rods. Once I was stoned. Three times I was shipwrecked. Once I spent a whole night and a day adrift at sea. I have traveled on many long journeys. I have faced danger from rivers and from robbers. I have faced danger from my own people, the Jews, as well as from the Gentiles. I have faced danger in the cities, in the deserts, and on the seas. And I have faced danger from men who claim to be believers but are not. I have worked hard and long, enduring many sleepless nights. I have been hungry and thirsty and have often gone without food. I have shivered in the cold, without enough clothing to keep me warm.
So how could face such horrible life experiences and still keep moving forward, fulfilling his purpose? Why didn’t he give up? Why didn’t he quit? Paul had every reason to ring his hands and quit. Millions of us would have quit after all Paul went through and few of us would criticize that decision. But Paul NEVER quit. Why?
It's in his identity. Paul knows exactly who he is and precisely what he’s called to do. When you know these things, there is no reason to quit. Let’s look at what Paul writes about himself in Romans.

What Did Paul Know?
The book of Romans is the first letter written by Paul found in the New Testament. It was written somewhere between 57 & 58 AD, just before we learn of his imprisonment in Caesarea. Romans is actually the last letter that Paul writes and many see it as a summary of his thoughts on Christian life. At the time Paul writes this letter, he’s never been to Rome and as such, he’s writing to strangers, just like us.

Here’s how he opens his letter:
I, Paul, am a devoted slave of Jesus Christ on assignment, authorized as an apostle to proclaim God’s words and acts. I write this letter to all the believers in Rome, God’s friends. The sacred writings contain preliminary reports by the prophets on God’s Son. His descent from David roots him in history; his unique identity as Son of God was shown by the Spirit when Jesus was raised from the dead, setting him apart as the Messiah, our Master. Through him we received both the generous gift of his life and the urgent task of passing it on to others who receive it by entering into obedient trust in Jesus. You are who you are through this gift and call of Jesus Christ! And I greet you now with all the generosity of God our Father and our Master Jesus, the Messiah. (Rom. 1:1-7)

Notice how Paul starts the letter with a greeting in which he describes himself as a devoted slave of Jesus Christ. Notice how few words he spends on his identity and how low his identity is, he’s a slave. It sounds like the apostle knows full well that the last shall be first but I wonder if he was ever concerned about whether a slave’s letter would be received by the church in Rome.

Paul goes on to describe his mission saying he is on assignment, authorized as an apostle to proclaim God’s words & acts. Paul here describes his drive, his role and his goal. He spends more time detailing what he is called to do rather than who he is and he clearly outlines everything we may need to know about his work and his purpose.

Lastly, Paul describes his Savior and he does it so deeply and so passionately that we could stop the letter right after verse 7. He lays out who God is, what he’s done through the life of Jesus and what that means to the recipients of this letter.

Notice that Paul does not spend any time talking about what he was or what God did for him. When introducing himself, Paul talks about his work, his mission, his calling. He doesn’t fall back into “testimony syndrome” like so many Christiians do. You know, when the bulk of your discussion on God relates to how bad you used to be? Paul is all forward thinking. It’s as though Paul is starting this letter to the church in Rome just as if he were at a networking event. Think about it, when we meet someone in a business setting, we don’t ask, “who are you?” We ask, “what do you do?”. Paul is talking about what he’s called to do and who employs him.
There’s a great lesson here from Paul to focus our sights and our words on what God has for us in our futures not just what He did for us in our past. I believe that too many Christians, have spent too much time discussing what they were and what they did and not enough time talking about what they are called to do. Most millennials of faith find it challenging to clearly determine their identity; they don’t know who they are in Christ because they don’t know what they are called to do for Christ.

Do You Know Your Calling?
The reason most of us are so easily distracted from doing something great for God is because we don’t really know what we’re called to do. When we’re unsure of what we’re called to do it becomes very easy for us to go after any number of opportunities, few of which are in-line with God’s purpose for our lives. Something to ask yourself, “If I don’t what I’m called to do in Jesus, how will I know if I’m succeeding?” Maybe all that distraction and boredom is really God trying to remind us that the has something greater in store, if we’ll just focus.

That’s why Paul is able to do all that he does, without quitting… he knows who he is and what he’s called to do.

So how do we determine who we are and how in the world do we know what we’re called to do? Well, we can notice that Paul’s identity and his calling are directly tied to his past.

Look closely:
Paul says details his identity: he is a slave to Christ, fully submitted to the will and mind of Jesus. Paul goes on to say he is on assignment as an apostle meaning his job is to help build the body of Christ through church planting. Lastly, Paul says, his underlying mission is to proclaim the acts and works of Jesus. All of this current identity is the exact opposite of who Paul was before he met Jesus on the road to Damascus. God completely turned Paul around and used everything that he delivered Saul from to determine who Paul would become.

So what is your mission? What are you called to do? What’s on your calling card?